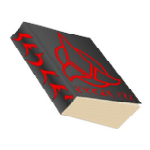 To see if I've improved enough to edit articles, I thought it would be beneficial to see if I could translate an article into English. I'm not going to do this a alot (twice would be the maximum), but I was wondering if you could review my translation and tell me how close I got. I chose cat. This is what it said at the the time of my attempt:

What I translated it to was:

It is a Klingon animal, but the Earth cat strongly resembles it. The Earth cat is described here. Cats are not very big, normally weighing ten pounds and being two and a third feet long. It has four limbs, and its fur is very soft. It is normal for the fur for different ones to be variously colored; a cat could perhaps be black or white. It is sometimes orange and looks like bekpuj, but it is never blue or green. Cats can see perfectly in a dark environment. Its eyes are very efficient. It enjoys eating small birds.

Thanks for the welcome. I know your guide says that this wiki does not aim to teach Klingon, but how about adding a page for translation requests (en-tlh, tlh-en, etc)? Or a general forum, in English, for discussing the Klingon language? Most people out there do not speak Klingon, and even the ones that do speak it poorly. Outwith the main namespace we could accomodate them a little... Jonathan Webley 09:32, 13 March 2007 (UTC)

A page for translation requests sounds okay. They do exist in other language Wikipedias too, so why not? If you believe there is an english article (or german, dutch etc.) that you would suggest translating into klingon, then go ahead. On the other hand, this wikia is still so small, any article is welcome, we don't need translation requests as a list. The request is just translate all wikipedia. I'm kidding a little, but still serious ;-)
A forum is not a good idea. As you said, this wikia is not *about* Klingon, it's *in* Klingon. To discuss and learn tlhIngan Hol, you better join the tlhIngan Hol yejHaD (KLI), or its email discussion group. Such a forum here might grow too fast, and might forget the first aim of this wikia: use Klingon! Of course you can discuss language topics when it concerns a specific problem inside the Talk-(ja'chuq)-page of an article. But I believe that the English Wikipedia does not have a general forum for discussing the English language, does it?
-- Lieven 10:01, 17 March 2007 (UTC)

You keep pressing me to create some new articles (or contribute to existing ones). I will, one day, when my Klingon improves somewhat... Jonathan Webley 11:54, 17 March 2007 (UTC)

I don't know how much Klingon you speak, but don't wait too long! It's better to write with mistakes than write nothing at all. Maybe you better first try in your profile, then we can easily see what is possible for you. -- Lieven 14:04, 18 March 2007 (UTC)

As you might know I am involved in the Klingon Wiktionary, which complements the Klingon Encyclopedia. I recently changed some of the special messages, such as "edit" to "choH". This appears as a tab heading on articles. Unfortunately the wiki software converts it to lowercase - "choh". Any idea how we correct this? Jonathan Webley 09:07, 21 March 2007 (UTC)

Unfortunately I do not know. But maybe you can look at the formatting of this klingon wikia (monobook.css I believe, but not sure). As you can see here, capital words are no problem, we can even have articles with minor case names. I don't know how they did it. Perhaps wikia uses different software than wiktionary? -- Lieven 11:30, 21 March 2007 (UTC)

I remember we had the same problem on Wikipedia, when the Klingon version was still there. I think the solution was indeed somewhere in the monobook.css file... can't remember what had to be changed, though. — André 12:05, 21 March 2007 (UTC)

Thanks guys. As far as I can tell the software is the same, but wikia has advertising. I'll dig around some more. Jonathan Webley 13:21, 21 March 2007 (UTC)
I just copied over your monobook.css, and now choH and vIH are capitalised correctly in the tabs. It also changes the default font so that l and I are easier to distinguish. Thanks. Jonathan Webley 13:30, 21 March 2007 (UTC)

If you know how to do changes inside the monobook.css, perhaps you could tell us a way on how to make the letters larger. It's pretty small here, increasing the size by one unit won't do any harm. Thanks for anyone who can do this. -- Lieven 16:32, 21 March 2007 (UTC)

The easiest way to change the font size is to do it using your browser, in IE its view>change text size, but you probably know that already. Jonathan Webley 08:56, 22 March 2007 (UTC)

There's an easier way: Go to your own monobook.css (User:Jonathan Webley/monobook.css) and insert the following line there:

Hi Lieven. You certainly have to stop deleting all the redirects! Why did you delete "Esperanto", for example? The more reasonable redirects to the actual articles we have, the better. Otherwise people who don't know the Hol-convention won't find the article. Please leave them there, they are necessary. They don't do any harm to this Wikia either. — André 17:09, 23 March 2007 (UTC)

Okay, you are right with Esperanto, which I just restored. But the other pages should not be there, like francais or Sverige, because of the agreed to naming convention which says to use "only" english names. If we had other pages in other languages redirecting, we would end up with hundreds of pages redirecting to one article. Besides, if you search for "French", the search result shows French Hol. ... Do we agree? maQochbe''a'? ;-) — Lieven 08:13, 24 March 2007 (UTC)

Hi. Are you a sysop? I was just wondering. Why don't you just have it as an option to change the side bar into klingon. You can do this by changing into any of the languages in your preferences and from the edit the system messages. This will not edit the english version, but the one that you have set your preferences to. Well, good luck anyway. --Steinninn 13:49, 3 June 2007 (UTC)

Hi! I'm writing this to you as you are one of two people in Category:User tlh-3. I was wondering if you would be interested in starting a localization process for Klingon, so that we can get MediaWiki in Klingon.

Localization can be done here on this wiki, but that will mean that it will only be useful here, and not be shared with other wikis. However, there is a system at BetaWiki that lets users translate the interface to their language, and makes the centralized localization files update, so that all wikis running MediaWiki can use the language. This means that you can choose to have a Klingon interface on all Wikia wikis, and also all Wikimedia wikis, like Wikipedia.

I hope you will be interested in this, and join in the effort of translating MediaWiki to all human languages (and then some). Jon Harald Søby 19:04, 3 June 2007 (UTC)

I am interested in this, but apparently the MediaWiki softare has changed: I asked the main localization center of MediaWiki if I could add Klingon as a language and it was rejected, with the explanation that there are too few people working on it and that it would end up in english anyway. That is quite unfortunate. As a sidenote, I have entirely translated the FosWiki interface into klingon, just check out foswiki.org -- Lieven, Klingon Wikia Admin (talk) 18:31, January 28, 2016 (UTC)

We Have a Blogging system platform to create Blogs in many languages (53 at this time), Nireblog.com http://nireblog.com.

We want to make a Klingon (tlhIngan Hol) version of Nireblog, nireblog.com/tlh, we have a system to create tranlations of text string, Niretrad http://niretrad.nireblog.com could you help us to create Blogging platform in Klingon or you now somebody.

Thanks a lot and sorry for this off-topic (when you read, please delete).

My email is ketari in gmail

Lieven, i invite you for contribute in my encyclopedia (english) or spanish. Thanks. Can i give you the sysop status.

The translation was maked by MisterWiki. See Spanish Wikipedia.

Hello Lieven I will be visiting Germany from feb/15 to feb/29 and I would be glad to be in touch with Klingonists around Berlin, Frankfurt and Köln. Could you tell me of any?

Do'Ha' jIjangmeH jIpaS. Sorry, I guess I'm too late too answer this. But anyway, I do not know of any real klingonists you might be able to meet in your mentioned cities. On the other hand I know many people who can speak "very little" Klingon. Are you still travelling? can you still read this? -- Lieven 08:38, 24 February 2008 (UTC)

Hi! Would you like this wiki to be ad-free? I'm looking for wikis to be part of a new program which would remove all ads from the wiki for $19.95/month.

Problem with my user page...Edit

Moving this wiki to Miraheze Edit

Why would you want to do that? Besides, there is not much traffic here anyway, so it wouldn't be worth the work. But again: What is the purpose or reason to move this wiki to a different wiki provider? -- Lieven, Klingon Wikia Admin (talk) 08:50, December 2, 2018 (UTC)

Hi again. Thanks for answering; I lost track of this message because - as I said - this wiki is not very active. Nevertheless - I have looked at your proposal, and it sounds interesting, although I still have my doubts a little. My main question is: how can you assure that Miraheze stays "alive"? Since its all volonteers, I am afraid that it may disappear without notice. That would be sad. Fandom still has lots of ads, which help them stay active at least, altohugh those really bother. Maybe we can continue that discussion in private messages? Contact me at one of my social networks at @Klingonteacher -- Lieven, Klingon Wikia Admin (talk) 07:53, June 30, 2019 (UTC)

Retrieved from "https://klingon.fandom.com/wiki/User_talk:Lieven?oldid=6446"
Community content is available under CC-BY-SA unless otherwise noted.